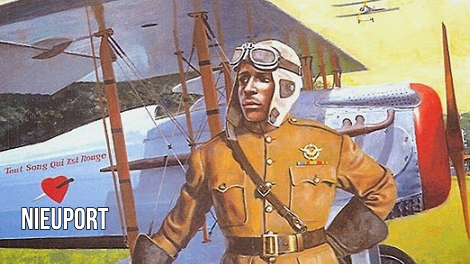 Eugene Bullard was the first recorded African American fighter pilot in history. Ironically, he wasn’t allowed to fight for America during the war. He had fled to France in the early 1900s because of the racial tension in America. There in France he joined the French army. Became an active foot soldier and then later became a military pilot

He flew this plane, the Nieuport. Consider it the F22 of 1916 as it was one of the first aircraft where a machine gun worked in sync with the airplane propeller.
After the war, Eugene returned home to America. During World War II after Germany invaded France in May of 1940, Eugene Bullard volunteered and served with the 51st Infantry Regiment in defending Orléans on June 15, 1940. Bullard was wounded, but he escaped to neutral Spain, and in July 1940 he returned to the United States.Bullard spent some time in a New York hospital and never fully recovered from his wound. Moreover, he found the fame he enjoyed in France had not followed him to the United States. He worked as a perfume salesman, a security guard, and as an interpreter for Louis Armstrong, but a back injury severely restricted him. In 1945, he attempted to regain his nightclub in Paris, but it had been destroyed during the war. He received a financial settlement from the French government and was able to buy an apartment in Harlem, New York City.

Eugene is one of the greatest stories and I think more people should know about his military and aviation career man and celebrate is heroism.

Become A Commercial Pilot In 9 Months https://www.slingpilotacademy.com
Use the referral code: “MOJOGRIP” to get $1000 OFF

Manage your aircraft with https://coflyt.com
Use the referral code: “MOJOGRIP” to get 60 days free.

Vans RV-14 Is The Muscle Car Of The Fleet

Velocity Twin – Modern Aircraft That Gives All The Power You Need